APRIL 2, 1929 - OCTOBER 31, 2021
"It was just enjoyable to be able to serve the people of this state, it was a great experience for me, it was a high honor and a wonderful privilege and I just hope that I gave back as much as I got." 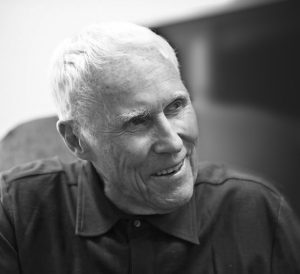 Frank L. Farrar was born in Britton, South Dakota on April 2, 1929, to Virgil W. and Venetia T. Farrar. He is the youngest of their five children.

Frank graduated from Britton High School then went on to further his education at the University of South Dakota where he received a Bachelor of Science in Business and a LLB degree at the School of Law. While attending the University of South Dakota, he served as president of Alpha Tau Omega fraternity and inter-fraternity council, and was the student body president as well. He was also a member of the Phi Delta Phi legal fraternity.

After graduating from the University of South Dakota in 1953, Frank served two years in the Korean Conflict and was discharged as a First Lieutenant in the U.S. Infantry. He also served in the U.S. Army Reserve until discharged as a Captain. He then performed as an Internal Revenue Agent, a judge, States Attorney for Marshall County, Attorney General for three terms, and served one term as Governor for the State of South Dakota.

After his public career, Frank entered into various business opportunities to include real estate, insurance, farming, banking, and investments. To assist in bettering the lives of others, he supports charitable programs that emphasize poverty, poor health, and job opportunities.

A former Boy Scout, Frank was president of the Pheasant Council Boy Scouts of America. He was a troop leader of local Boy Scouts, an Eagle Scout, and received his Distinguished Eagle Scout honor in 2001.

And so I try to do everything I can and participate in everything and help others and be kind to everybody, because everyone has a problem. And you’ll have a wonderful life. And my life has been spectacular.” – Frank Farrar, 24th Governor of South Dakota

Frank is a member of the Masons, Lions, Elks, Odd Fellows, Shriners, Britton Chamber of Commerce, Federation of Small Businesses, U.S. Triathlon Association, Who’s Who of America; of the World; of Politics; and Who’s Who of the Legal Profession. The Coalition of America elected Frank to the board of directors to promote the economic and agriculture opportunities to rural America throughout the United States to preserve our small towns and counties. Frank was one of the founders of the Britton Area Foundation, a similar operation to the South Dakota Community Foundation.

Driven by a diagnosis of terminal cancer, Frank participated in the Senior Olympics as well as the Ironman competition throughout the United States and the World. He has completed over 360 triathlons, including 28 Ironman’s. Through exercise, good nutrition, help from above, and the love and care from his wonderful wife, Frank’s cancer has gone into remission. Everything Frank Farrar has done, large or small, was accomplished through hard work and determination. He gives credit for the successes in his life to the support, encouragement and sacrifice of his wife, Patricia, who has done so much for the family. Frank and Patricia Farrar celebrated their 53rd wedding anniversary in 2006.

The Farrar Family continues to carry on his legacy.

Can I help you with internet
or mobile banking enrollment?
Click here for assistance!

From time to time, we provide links to other websites for the use of our visitors, which have been compiled from internal and external sources. By clicking “Continue” below, you will be opening a new browser window and leaving our website. Although we have reviewed the website prior to creating the link, we are not responsible for the content of the sites.

Information on linked website pages may become dated or change without notice, and we do not represent or warrant that information contained on these linked pages are complete or accurate. We suggest that you always verify information obtained from linked websites before you act upon such information.

The privacy policy of this bank does not apply to the website you visit. We suggest that you always verify information obtained from linked websites before you act upon such information.